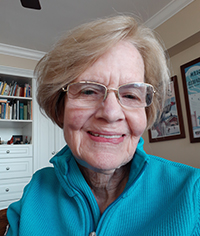 Since graduating in 1957, Helene Zimmer-Loew has demonstrated an extraordinary commitment of giving back to Connecticut College. Soon after graduation, when Helene began teaching German at a Long Island high school, the College launched a major fundraising campaign and Helene knew she wanted to participate. In a significant act of generosity, Helene pledged $500. Her annual salary was $4,200.

Over the years, Helene has continued to selflessly give her time and resources, engaging her classmates and other alumni in the life of the school and supporting new initiatives. She has served as a Class Gift Chair for 50 years, as president of the Alumni Association Board of Directors, and as a member of the Board of Trustees. In 1979 Helene was the annual fund chair. “That was the first year that Conn raised a million dollars for the annual fund. One of my proudest moments! We called up the chair of the Board of Trustees and he called me an overachiever. It was quite a milestone.”

The child of immigrants, Helene first heard of Connecticut College at her father’s hair salon in New London that was frequented by Conn faculty. She received a scholarship and as she says, “worked on campus in every office, including the library and the bookstore and even as a switchboard operator.”

Helene’s lifelong belief in the importance of language study and global engagement motivated her, along with good friend Joan Gilbert Segall ’57, to take on one of her most ambitious efforts in support of Conn. A few years be¬fore their 50th Re¬union, Joan called and said, “I’m going to challenge you. I want us to give $100,000 to the Col¬lege in honor of our 50th Reunion, and I know you can find the money somewhere.” They were successful and since then the fund has supported many students for summer study abroad. “Every year, I receive lovely letters and pictures from students who have spent the summer abroad, often working on important issues. I’m very happy about that. I wish Joan were here to read their letters.” Joan died in 2009.

In recognition of her significant commitment to Connecticut College, Helene has received the Agnes B. Leahy Alumni Award, the Alumni Tribute Award, and the College Medal—the highest honor the College can confer. Helene also holds master’s degrees from the University of Mainz/Middlebury College (in German) and from St. John’s University (in education), a university certificate from SUNY Albany, and an honorary doctorate from Middlebury College.

Helene continues to actively support the College and encourages everyone to consider planned giving as a smart way to give back in gratitude for the excellent education they received. “For someone who came from very little, I have had a good deal of success and good fortune. When I was creating my living trust, I decided that I would give the College $100,000. I’ve been very impressed with members of my class who have led successful lives and give Connecticut a lot of credit for that success, as do I, and have chosen to give back. I think it’s incredibly important that we support young people in pursuing the fine education like the one I received at Conn. I believe that is the way to go, to help people whenever you can.”